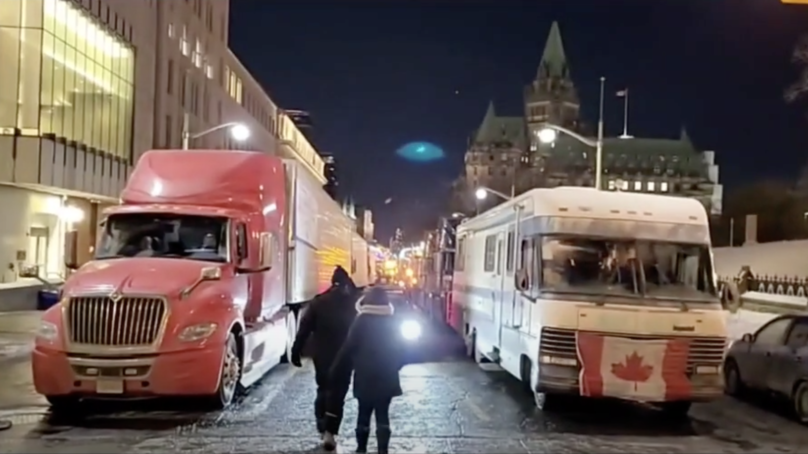 Freedom Convoy Trucker Protests End in Canada, But What About the U.S.?

Canadian authorities shut down the “Freedom Convoy” trucker protest after just five days, but the anti-mask/anti-vax mandate movement appears to only be expanding here in the U.S. – and it’s a movement that may have roots in shady foreign social media posters.

The Ambassador Bridge, the busiest land border crossing between the U.S. and Canada, reopened just before 12 a.m. Monday morning. The blockade cost the U.S. auto industry alone an estimated $988 million, due to the stoppage of vehicles and auto parts flowing across the two countries.

The border reopening came after a Canadian judge’s order, which threatened those participating in the blockade with fines or arrest if they did not disperse. Since then, Prime Minister Justin Trudeau has invoked Canada’s Emergencies Act for the first time ever, threatening to freeze the corporate finances of anyone whose trucks are used in further blockades.

Here in the U.S., the Department of Homeland Security is watching closely.

Is there a darker origin to the #FreedomConvoy #TruckerProtests at the #USCanada Border?…

Investigative journalists who track social media scammers have traced the first Facebook posts about the Freedom Convoy back to January 28th and 29th, to what they refer to as “an endless rabbit hole of astroturfed groups and pages.”

“Astroturfing” is the practice of hiding the true origins of a public campaign by making it appear as though it originates from, and is supported by, a grassroots organization. In the case of the trucker convoy, NBC reports that while it appears as though the movement began organically, in actuality Facebook groups drove the Canadian truckers to block the roads in Ottawa that were being run by fake accounts tied to “content mills” in countries as far away as Bangladesh, Romania.

A Movement That Is Gaining Momentum

Gerald Seib, Executive Washington Editor for the Wall Street Journal, told Fox News Sunday that he sees the trucker movement evolving inside the U.S. much the way the Tea Party did back in the 2010s. “The Tea Party movement started out as a protest about bailouts and morphed into a larger populist cause. The danger is that some far-right groups are latching onto this movement, as well. That could turn it darker and maybe even violent.”

In fact, on Monday, Royal Canadian Mounted Police arrested 13 “militants” at a blockade near an Alberta-Montana crossing and seized a cache of weapons and body armor. The Mounties say the group was willing “to use force” if police attempted to disrupt their border blockade.

On this side of the border, the movement is starting to get the backing of high-profile Republicans—not least of all former President Trump, who praised what he called “peaceful protesting” in Canada while warning that the movement could spark a “tinderbox” in our own country.

“I’m all for it,” said Senator Rand Paul (R-KY) said in an interview last week. “Peaceful protest, clog things up, make people think about the mandates.”

Democrats like Rep. Debbie Dingell of Michigan, where the auto industry was disrupted by the Freedom Convoy, take a differing view. “We have freedom of speech,” she said on CNN Monday. “I can’t tell you how many protests I’ve been in, but when does that right intrude upon people’s security and their daily income and their wages?”

As for U.S. motives, the Freedom Convoy started as a movement against mask and vaccine mandates for truckers crossing the Canadian border, but most American truckers are not mandated to wear masks because they only drive within the lower 48, nor are the vast majority required to be vaccinated. Logic dictates, then, that if the movement is going to gain traction in the U.S., it would have to morph into something else, as the Wall Street Journal’s Seib predicts.

Is Capitol Hill Next?

A suspected plan to disrupt the Super Bowl here in the U.S. never came about.  However, the same DHS intel that was tracking a U.S. convoy of trucks to California (for the big game) also expects it to reach Washington DC in time for President Biden’s State of the Union address at the U.S. Capitol on March 1.

And the movement may outgrow the trucking industry, whose largest union in the U.S, the Teamsters, issued a statement Thursday denouncing the blockade.

Investigative reporter Ben Collins pointed out on MSNBC on Monday, no trucks are necessary to create a major disruption in traffic and the flow of commerce: “You can bring your van. You know this is a thing that people [on social media] said, like maybe you can bring your ‘mom van.’ Bring your mini-van with you. They just need numbers at this point.”

Bond Funds Lurk as a Challenge to Fed’s Inflation Fight