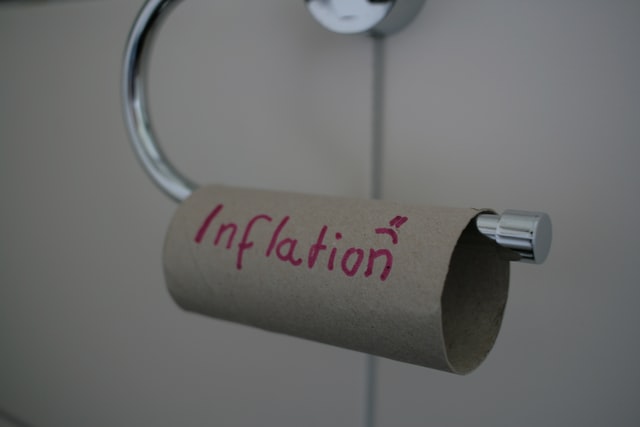 “Inflation is Much Too High” – How Do We Bring It Down?

In an effort to bring down inflation, the Federal Reserve Wednesday raised its core interest rate by 0.75%, a bolder increase than the half percentage point many analysts had been predicting. In announcing the move, Fed Chairman Jerome Powell said, “The labor market is extremely tight, and inflation is much too high.”

In fact, inflation surged in May at its fastest rate since 1981.

But are interest rates the only answer? Dean Baker, Co-Founder and Senior Economist at the Center for Economic Policy & Research (CEPR) explains what’s really driving inflation and whether other steps can be taken to give consumers some much-needed relief.

“We’ve had these one-time events that led to big jumps in prices, and that’s, to my view, most of the story of inflation,” Baker tells Political IQ.

Specifically, he’s talking about the pandemic and the war in Ukraine.

Several factors occurred because of Covid. First, he says, “The producing countries, Thailand, Vietnam, China, they had shut down. The other part of the story was the docks. Our shipping was overloaded.”

As a result, prices rose on items that typically see very little inflation. “Appliances went up around eight or nine percent. Televisions originally went up, and then they went back down. Clothes which typically fall in price rose about five or six percent.”

Cars, too. Especially used cars, Baker says, which started selling for around the price of new ones. One of the reasons for that, he adds, was a semiconductor shortage, thanks in part to a fire in Japan at one of the only semiconductor factories in the world.

And now there’s the war in Ukraine. “Russia and Ukraine are big exporters of grain,” Baker notes, “so corn prices have risen 30 or 40% which gets passed on to food prices.”

The price of gasoline, Baker says, is the biggest driver of inflation right now. It’s risen about 40% since Russia invaded Ukraine. “And that’s huge,” he notes, adding that gas makes up about 6% of the Consumer Price Index, which averages what consumers pay over time for a vast swath of goods and services.

“So when you get an item that’s a good share of the index and it goes up 40%, it has a very big impact. People see this very directly because it’s not an item like a car where very few people are buying a car every year.”

Further, gas prices affect the cost of other goods. “It raises shipping costs,” says Baker. “Dairy products, for example. It’s expensive to bring the milk to the dairy to be processed and then to the grocery store. It’s the same for a lot of other farm items, and so it gets passed on that way.”

President Biden on Thursday invited the heads of several oil refining companies to the White House to discuss gas prices. It follows a letter he sent to them demanding they explain why they’re not putting more gasoline on the market. “At a time of war, refinery profit margins well above normal being passed directly onto American families are not acceptable,” Biden wrote, adding that the lack of refining was driving gas prices up faster than oil prices.

Meanwhile, oil lobby The American Petroleum Institute handed the White House a 10-point wish list, including lifting restrictions on fossil fuels that it blames for the price hikes.

Baker had wanted to see the Feds raise their rate a half percentage point, not three-fourths. The rate in question, he says, is “the rate that banks charge each other for lending overnight reserves. That’s not what we see when we buy a house, buy a car, buy on credit card, but raising that rate indirectly affects those other rates, and probably the most important in that picture is the mortgage rate.”

He is concerned that going too far, too fast could possibly send the U.S. into recession. “The Fed had a zero overnight rate until March. And at that point it was a very low unemployment rate, basically the lowest we’ve been since the late ’60s.”

However, Mohamed El-Erian, Chief Economic Adviser at Allianz Capital, criticized the Fed for not going bolder sooner. He said Sunday of inflation, “Most of it could have been avoided, had early actions been taken” by the Fed.

El-Erian went on to note, “We have a strong labor market. And that’s what’s keeping us away from a recession right now. That’s why a recession is a risk scenario, not a baseline.”

Other Actions Could Help Ease Inflation

Beyond efforts by the Fed and waiting for Covid and the war in Ukraine to ease up, Baker says there are other actions the Administration can take to help bring prices down.

“We could lower drug prices. Drugs carry a huge markup,” he notes.

Also, lifting some of the tariffs imposed on China by the Trump Administration. “Obviously you want to look at those case by case,” says Baker. “But you could certainly lessen many of them with no obvious cost in terms of job impact here because the items are in short supply anyway.”

He adds, “This would be longer term, but housing policy, as far as you could promote more construction.”

One way to do that would be to give communities incentives to make zoning less restrictive, he says.

Another longer-term solution: anti-trust. “Breaking up some of the concentration in sectors like telecommunications, probably airlines. I think that could have some downward impact on prices.”

But that comes with a caveat, he warns. “That inevitably involves an action by the Justice Department, and it could take years and years.”