US lawmakers often unite when war looms. Not this time

This post was originally published on this site There is a longstanding custom in US politics that, whatever squabbles are dominating the domestic agenda, Democrats and Republicans rally around the flag when crisis looms overseas. But the threat of war in Ukraine is severely testing Congress’s traditional role as a... 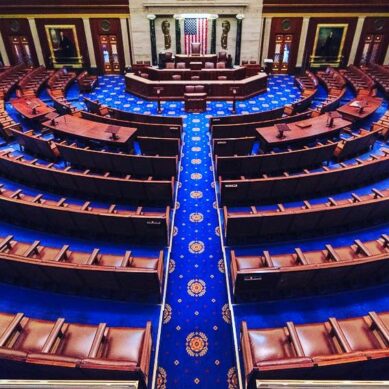 Does Democrat Exodus from the House Spell Doom for the Party During Midterm Elections?

On Monday, Ted Deutch (D-FL) announced that he won’t be seeking reelection, making him the 31st Democrat to call it quits in the House —the most in three decades, when 41 House Democrats retired in 1992. And the drop-outs are coming as Democrats already face an uphill battle in holding... This post was originally published on this site America is growing more geographically polarized—red zip codes are getting redder and blue zip codes are becoming bluer. People appear to be sorting. (Image credit: John Burnett/NPR)

This post was originally published on this siteGovernment funding is set to expire Friday and, though lawmakers have expressed confidence there won’t be a shutdown, it’s still not clear when the Senate will vote to approve a stop-gap spending measure.

This post was originally published on this siteHouse Democrats are retiring in numbers not seen in decades as a dire political outlook, new district lines and a negative environment at the US Capitol have combined into a toxic brew for lawmakers considering their political futures.

This post was originally published on this siteThe Democratic National Committee, White House and aligned interest groups are growing discontent about how to create a national network to support President Biden’s agenda and enhance his image, leaving some in the party puzzled about the big-…

Sen. Ben Ray Luján (D-N.M.) suffered a stroke last Thursday and is recovering in an Albuquerque hospital, his office said Tuesday. After feeling dizzy and fatigued, Luján, 49, checked himself into the hospital and “subsequently underwent decompressive surgery to ease swelling,” his chief of staff said in a statement. “He is currently being cared for at UNM Hospital, resting comfortably, and expected to make a full recovery.”
This was evidently the first many of his colleagues heard about Luján’s medical condition.
“Jesus. He had a stroke? First I’ve heard of it,” Sen. Jon Tester (D-Mont.) told Politico. “Oh, my God. I’ll find out. I did not know that, wow. It makes me worried about him, he’s too young for that stuff.” Luján’s fellow New Mexican, Sen. Martin Heinrich (D), also learned about the stroke Tuesday, and Senate Majority Whip Dick Durbin (D-Ill.) didn’t know until reporters told him.
Luján’s stroke was a reminder for Democrats that their control of the evenly divided Senate is fragile and hostage to the whims of fate. His absence won’t affect President Biden’s Supreme Court confirmation project immediately, but Biden would need his vote if no Republicans voted to confirm his nominee. Some Democrats suggested Senate leaders may need to adjust their agenda to focus on legislation with bipartisan support.
Democrats have a little bit of breathing room, because two Republican senators — Mitt Romney (Utah) and John Hoeven (N.D.) — are in quarantine after COVID-19 diagnoses.
Two other sitting senators — Tim Johnson (D-S.D.) and Mark Kirk (R-Ill.) — “suffered strokes in recent history, leading in both cases to extended absences,” the Post reports. “Their strokes were of a different types than Lujan’s,” but if Johnson had been forced to step down, he would have been replaced by a Republican, shifting the Senate from a 51-49 Democratic majority to a 50-50 split with the GOP in control. If Luján needed to vacate his seat, the Post adds, “New Mexico Gov. Michelle Lujan Grisham (D) — who happens to be a distant cousin of Luján — would appoint a replacement.”
“My hope is that Ben Ray will put himself first for the next few weeks so he gets an absolutely full recovery, because I can’t do this job without his help,” Heinrich told reporters.

This post was originally published on this siteThe party committees for Democrats and Republicans each raised about $400 million in 2021, with control of the House and Senate up for grabs in 2022.

This post was originally published on this siteA coalition of left-leaning businesses and progressive leaders are pushing for the Senate to take action on the Democrats’ spending and climate package after the initiative languished in the upper chamber last month.More than 250 organizations and&…