Politics
Foreign Relations
In Other News

This post was originally published on this siteUkrainian President Volodymyr Zelensky said on Tuesday that he spoke to German Chancellor Olaf Scholz about the ongoing war with Russia and further actions that can be taken against Moscow. “Held productive talks with @Bundeskanzler. Discussed the situation on the frontline, further pressure... This post was originally published on this siteBut US is wary of sending military aid to Ukraine for fear it’s seen as direct involvement in war. 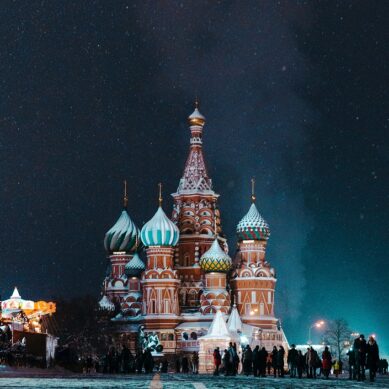 This post was originally published on this siteConvoys of armored vehicles were seen rolling across Ukraine’s separatist-controlled territories. It wasn’t immediately clear if they were Russian. This post was originally published on this site Germany accused Russia on Friday of endangering Europe’s security with demands that recall the Cold War, as Western leaders arrived for a Munich Security Conference set to be dominated by the Ukraine crisis. Fears are growing in the West that Russia is...

German chancellor heads to Kyiv, Moscow as Europe and Ukraine strive to head off Russian invasion

German Chancellor Olaf Scholz is heading to Kyiv on Monday and Moscow on Tuesday to speak with the leaders of Ukraine and Russia, in the latest effort to prevent or at least delay a Russian invasion. Russia, which has an estimated 130,000 troops and naval vessels surrounding Ukraine, ostensibly for military exercises, says it has no plans to invade Ukraine again. But the U.S. says Russian President Vladimir Putin could order bombers and missiles to strike any day now, possibly Wednesday.
Ukrainian President Volodymyr Zelensky is trying to calm panic inside Ukraine, even as his approval falls as the Russian pressure rises. “Russian attack helicopters were spotted buzzing within miles of his country’s borders on Sunday,” The New York Times reports. “Allies evacuated their embassies, airlines canceled flights, and a large number of private jets departed from the capital,” suggesting an exodus of Ukraine’s elites.
President Biden and Zelensky spoke by phone on Sunday, a day after Biden and Putin held an inconclusive phone call. The U.S. said it reiterated to Ukraine that Russia will face severe economic consequences if it invades, and Kiev said Zelensky invited Biden to visit Kyiv, saying such a visit would send “a powerful signal” and “contribute to de-escalation” with Russia. “The United States has already ordered most American diplomats to leave, making a presidential visit unlikely,” the Times notes.
Zelensky also thanked Biden for U.S. support, including airlifting in munitions. “We hope that, among other things, it will help prevent the spread of panic,” he said.
Scholz’s visit is meant to “pacify national leaders angry at Berlin’s refusal to supply defensive weapons and take a more explicit line on sanctions against Russia,” Politico Europe reports. “German officials have sought to lower expectations” of a deal and said Scholz’s “main goal is to keep Russia engaged in international peace talks.” French President Emmanuel Macron made similar trips to Kyiv and Moscow last week, with little concrete fruit for his effort.
Ukraine is also demanding a meeting in the next 48 hours with Russia and other members of the Organization for Security and Cooperation in Europe (OSCE), saying Moscow had not met its Sunday deadline to explain why it has amassed 130,000 troops around Ukraine’s borders. Russia is a signatory to the OSCE’s Vienna Document, where any member can question another about perceived military threats.

Biden Will Press German Chancellor on Russia Sanctions and Pipeline

This post was originally published on this siteThe two leaders are meeting amid concerns that Germany has not been a forceful enough partner in calming tensions between Russia and Ukraine.

Pentagon to deploy 3,000 troops to Europe as tensions spike with Russia over Ukraine

This post was originally published on this siteThe Pentagon will send 3,000 troops to Germany, Romania and Poland this week. President Joe Biden had put 8,500 troops on heightened alert last week.